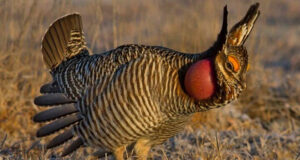 But in recent years, the chicken’s numbers declined amid growing development in the oil and gas and agriculture sectors, and conservationists worried the unique bird could be in danger of extinction.

The U.S. Fish and Wildlife Service proposed federal protections for the species last year under the Endangered Species Act, seeking an endangered listing for the bird in southeast New Mexico and West Texas and a threatened listing in the rest of the animal’s range, which extends through Colorado, Oklahoma and Kansas.

A species is considered “endangered” by the agency when its extinction is believed imminent, while “threatened” means the animal could soon warrant endangered status. Both result in the federal government developing a recovery plan and setting aside acreage deemed “critical habitat” of the species at risk.

A final decision on the lesser prairie chicken’s listing was expected this month, records show, and it could restrict access to lands needed for the chicken’s recovery and impact some of the region’s biggest industries.