The Lesser Prairie Chicken (Tympanuchus pallidicinctus) (“LPC”), is a member of the grouse family and can be found in multiple ecosystems across its five state range of Kansas, Oklahoma, Texas, Colorado and New Mexico. Once numbering in the hundreds of thousands across nearly one hundred million acres, as of 2018 (the last year annual aerial surveys were performed) there are only estimated to be approximately 38,637 birds left. These few remaining Lesser Prairie Chickens are spread across a now disconnected landscape that covers approximately 20 million acres.

The United States Fish & Wildlife Service (“USFWS”) announced its decision to list the LPC as Threatened under the Endangered Species Act in March 2014.

The LPC’s remaining habitat and population is vulnerable due to the next wave of development threats which are now occurring and targeted for its remaining habitat. Threats identified by the USFWS  include destruction of habitat through grassland conversion to agricultural crops and numerous impacts from the next generation of both traditional and renewable energy development and associated supporting infrastructure.

U.S. District Court for the Western District of Texas overturns USFWS listing of the lesser prairie chicken as threatened species under the Endangered Species Act in September 2015

On September 2, 2015, Judge Robert Junell  ruled to strip federal protections from the Lesser Prairie Chicken across its range.  The ruling by of the U.S. District Court for the Western District of Texas overturned the USFWS decision in spring 2014 to list the lesser prairie chicken as threatened in Texas, New Mexico, Oklahoma, Kansas and Colorado, where the bird’s native grassland and prairie habitat had shrunk by 84 percent.  Junell ruled that FWS failed to consider the extent to which a rangewide conservation plan crafted and administered by state wildlife agencies and supported by energy companies and landowners prior to the listing decision in March of 2014 would ameliorate the chicken’s top threats — including oil and gas and renewable energy development, grazing, woody species brush and tree encroachment, and conversion of rangeland to crops.

Legal experts said it’s quite rare for a federal court to overturn a FWS listing decision.  The USFWS has been working on the species status assessment for the Lesser Prairie Chicken since the Fall of 2016 after concluding that the species may indeed warrant re-instating protection under the ESA.

What is the Current Listing Status of the Lesser Prairie Chicken?

The USFWS proposed the Lesser Prairie Chicken to be protected under the ESA in May of 2021 under two distinct population segments: threatened in the northern three ecosystems (sand-sage, shinnery oak and short grass) and endangered in the southern most ecosystem (shinnery oak) ecosystem.   The final decision on the listing status of the Lesser Prairie Chicken is scheduled to occur likely in late May or June of 2022.

The vision for creating a portfolio of conservation banks across the range of the Lesser Prairie Chicken was conceived way back in 2008, but due to competing priorities at the time and lack of a potential market from a policy perspective, the plan was shelved until 2011. In April of 2012 the execution phase of the business plan began in earnest and the Common Ground Capital/LPC Conservation Team has executed on the majority of its major objectives over the past six years. 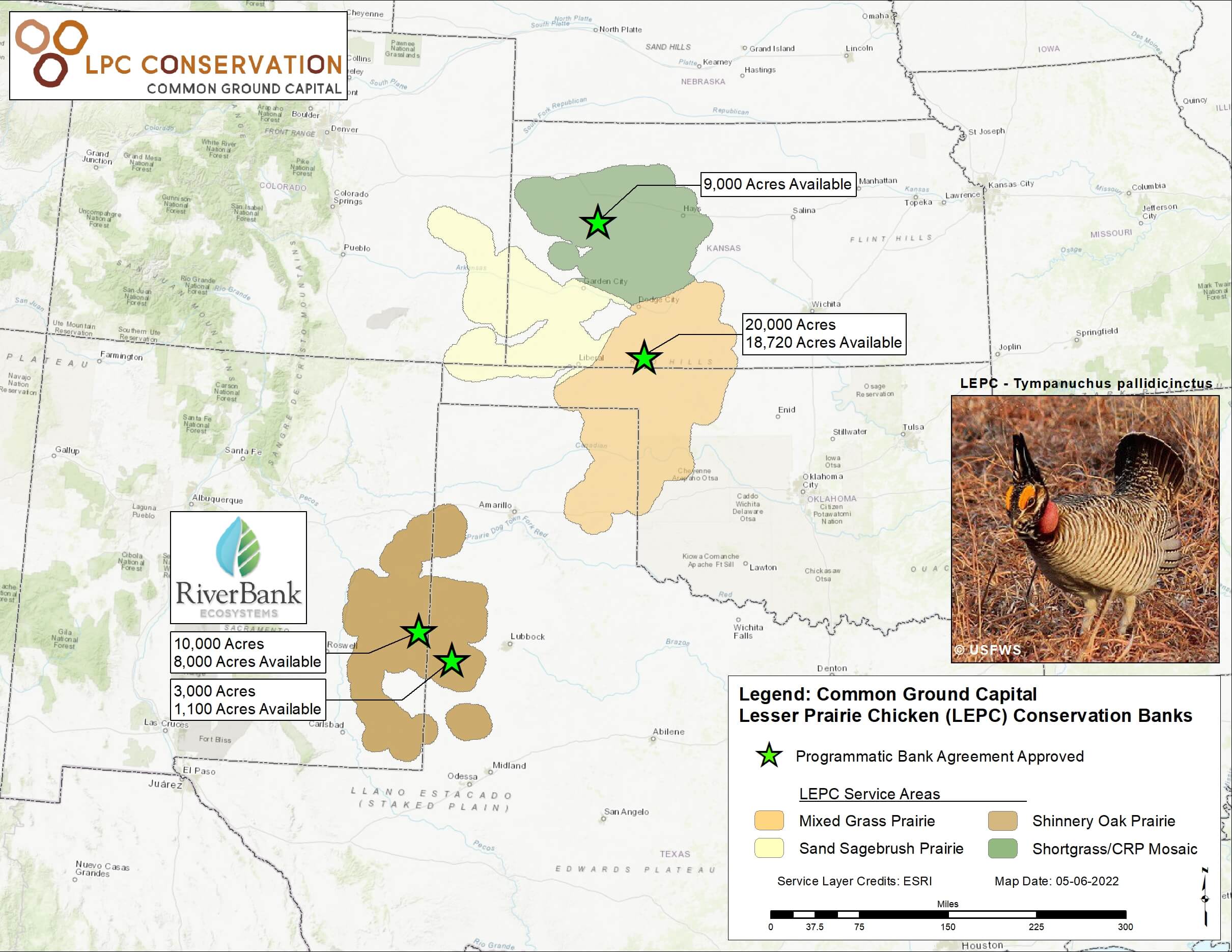 Through diligent efforts, Common Ground Capital (“CGC”) has worked with a limited and amazing group of private landowners to secure acreage and now fully approved conservation banks in three out of four ecosystems across the range of the Lesser Prairie Chicken.  CGC has also been involved and continues to try and work with WAFWA, the Great Plains wind energy HCP, and its own proposed Renewable & Transmission Industry permit solution and individual companies as potential purchasers of its conservation banking credits. As far as CGC knows, our conservation banks are the only approved mitigation option by the USFWS that has a high degree of certainty to withstand any potential legal challenges at this time and can deliver substantive progress on the two primary conservation objectives for the bird:  creation of large-scale “strongholds” and restoration of habitat.

What is an incidental take permit vehicle?

The short answer is that in order to impact an endangered species or its habitat you must acquire an incidental take permit (“ITP”)  through either Section 10 or 7 of the Endangered Species Act (“ESA”), typically through a habitat conservation plan (“HCP”) or through a biological opinion (“BO”) for a listed species under the ESA. For “take” that occurs prior to the effective date of a listing decision industry may pursue a candidate conservation agreement with assurances (“CCAA”), not to be confused with CCAA’s that private landowners may utilize. In the future HCP’s are expected to be eligible for take prior to and after the date of listing.   In rare situations, the USFWS will allow take through an approved conservation plan through Section 4(d) of the ESA. This option was, but no longer is,  available for the Lesser Prairie Chicken by way of the WAFWA Range Wide Plan. Up until 2016 the WAFWA RWP was the only means to offset “take” and receive ESA coverage for industry parties. Currently, WAFWA can provide coverage for the oil & gas industry only through that industry’s CCAA, although WAFWA has suspended new enrollment in this program as of the summer of 2019.  Other parties are working on industry wide permit vehicles, but they are not yet available.  Common Ground Capital now has two industry wide Habitat Conservation Plans approved: one for renewable energy, transmission and communication towers and one for oil and gas operators.  Bottom line, whatever permit take vehicle you choose, Common Ground Capital’s conservation bank credits should be considered as your solution for mitigation credit needs as our sites are the only mitigation solution certified by the USFWS that both deliver effective mitigation offsets and contribute to the conservation goals needed to recover the Lesser Prairie Chicken. Conservation bank credits can be used for different take vehicles/programs and allow industry parties to control credit supply via credit reservation agreements if necessary, thus protecting your mitigation investment and your ability to have credits when you need them to get your project completed on time.