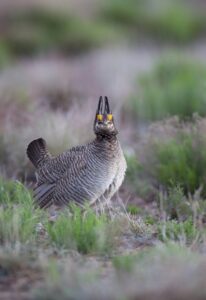 Oil and gas companies could play a key role in saving a nearly-extinct native bird species in southeast New Mexico.

That’s why the U.S. Fish and Wildlife Service released a plan specific to extraction operators that would specify actions they could take to prevent impacts to lesser prairie chicken (LPC) habitat in eastern New Mexico and portions of West Texas.

The service last year proposed listing the prairie chicken as endangered in its southern distinct population segment (DPS), which is in New Mexico and West Texas, while the northern DPS in Kansas, Colorado, Oklahoma and the northern Texas panhandle was proposed for a threatened listing.

Endangered listings unlock the strongest federal protection measures when a species’ extinction is viewed by the service as imminent while a threatened status means a species could soon become endangered.

Along with protecting bird populations, viewed to be as low as 1,500 in the chicken’s southern DPS, the Service is also tasked with setting aside lands that could be used as habitat for recovery.

That population was once believed to be in the millions across all five states.

To begin the work of recovering the bird to its former numbers, two habitat recovery plans were released by federal government: one tailored to the renewable energy sector last year and another published for the oil and gas industry Feb. 11, starting a 30-day public comment period.