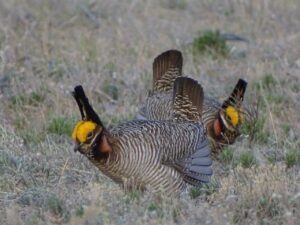 Among America’s iconic native birds, the lesser prairie chicken can be especially hard to spot —  hiding behind shrubs, seldom popping out except before sunrise in spring for flamboyant mating dances.

But now it may become Colorado’s first climate casualty.

A painstaking $428,000 state effort to avert extinction by relocating 205 of these chickens from Kansas to Colorado’s southeastern plains is failing, state records show. Colorado Parks and Wildlife biologists, and bird experts, blame hotter, drier conditions. Federal authorities have cited climate change as a factor in their decline. CPW data show the relocated chickens decreased from 139 in 2020 to fewer than 90.

Even now that the U.S. Fish and Wildlife Service has granted Endangered Species Act protection — the ecological equivalent of emergency-room life support — bird experts say the future of the lesser prairie chicken and its cousins — the Greater sage grouse, Gunnison sage grouse, and the greater prairie chicken — looks increasingly precarious.

“We’re seeing the lesser prairie chicken as one of the first in the line of many climate casualties,” said Jon Hayes, executive director of the Audubon Society for the southwestern United States.

Audubon Society scientists have estimated that, if climate warming continues unabated, more than 60% of bird species in North America will vanish by the end of the 21st Century.