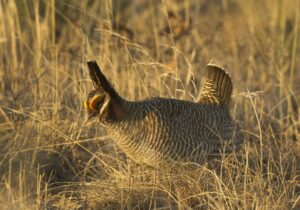 The name alone is a testament to cruel irony.

Makes me want to squawk.

Actually, it ought to make all of us want to cry, because the lesser prairie chicken — a sage grouse that once filled the endless grasslands of Eastern New Mexico and a big hunk of this nation’s southern plains — is little more than a plains fire or hailstorm away from extinction, at least in this state.

The numbers are better elsewhere, but some estimates have the lesser prairie chicken’s numbers in the low four-figures in New Mexico. It could be closer to 500. That’s a funeral notice.

And while that sad possibility is well-known in the conservation community, it’s largely been an eye roll, a shrug, to much of the public.

And for that, I blame, to some extent, the name.

If the species had been named Llano Estacado chicken hawk or Portales passerine — I’m kidding, but anything’s greater than lesser — maybe the bird wouldn’t be the most recent environmental canary in a coal mine.

But that’s what it is.

“It’s a bird that needs wide-open landscapes of grasslands, and in fact, it’s in trouble,” says Wayne Walker, a businessman who has become one of the species’ biggest proponents. “That means there’s a lot of other things in trouble.”